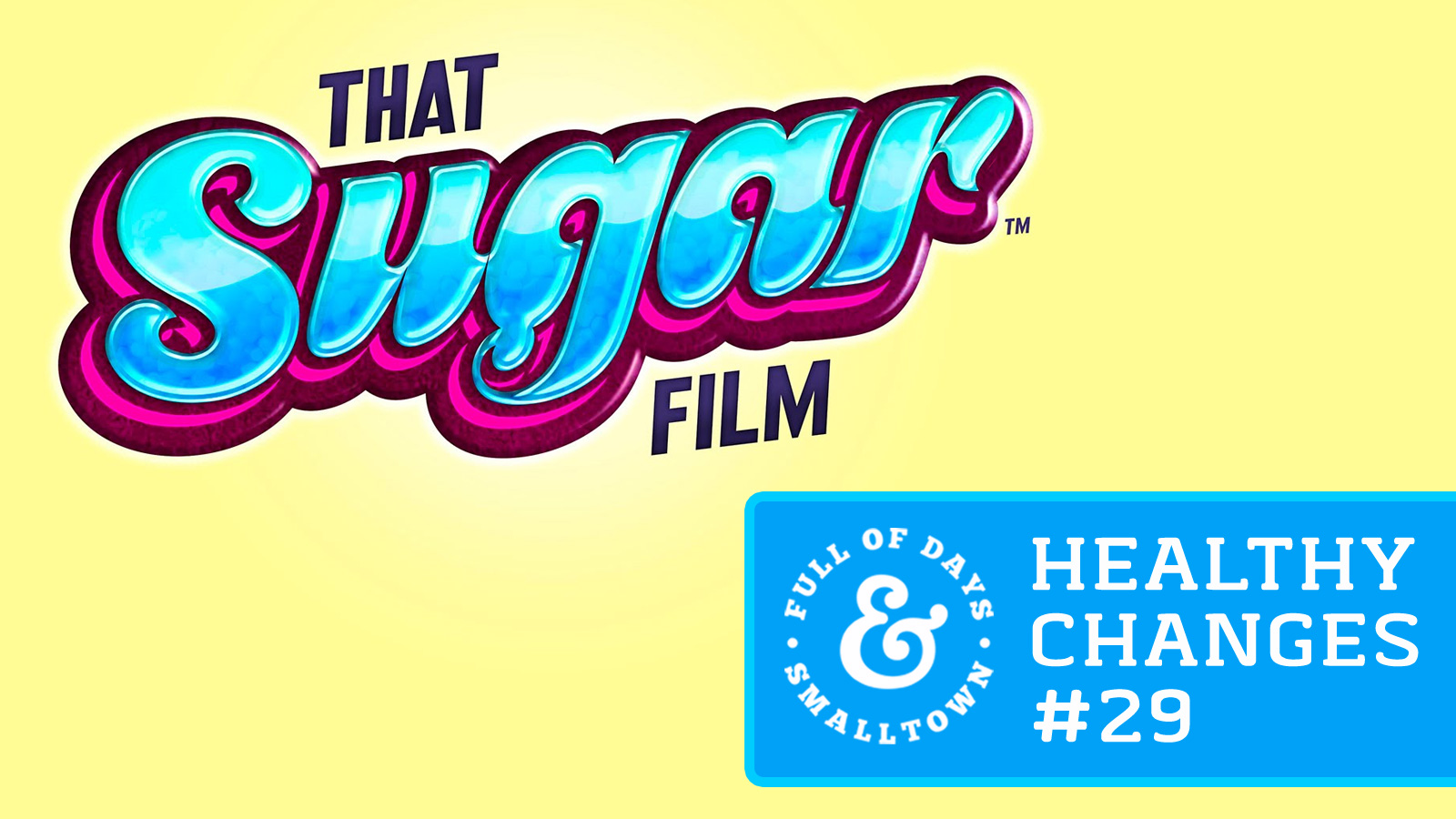 ave you ever wished you could un-learn something? Yeah, me too! This week we’ll be tip-toeing our way into a dreaded topic for most…sugar. That word that can cause cravings and evoke feelings ranging from pleasure to guilt.

Healthy Change #29 isn’t a change, rather an assignment that will hopefully precede change. The assignment is to watch a documentary called That Sugar Film (free right now with Amazon Prime, a mere $.99 without). In the film, Australian Damon Gameau becomes a human guinea-pig putting himself through a grueling 6 week “diet” consuming the equivalent of 40 teaspoons of sugar a day (based on the average Australian daily consumption). He did this consuming foods we might consider “healthy”, according to the Standard American Diet guidelines. No soda, no candy or ice cream, just “normal” everyday foods many of us consume daily.

Thousands of so-called “healthy” snack-foods are loaded with sugar. Take lowfat strawberry yogurt for example, this snack has a whopping 18 grams of sugar (equivalent to 4.5 tsp). No one would scoop 4.5 teaspoons of sugar into a bowl and eat it for a healthy snack, but somehow, when it’s mixed into low-fat yogurt (ya’ll remember how I feel about low-fat milk products, right?), wrapped up in a pretty container and slapped with a convincing label, it seems to change our entire mindset.

The problem is, this snack has been stripped of naturally occurring fat (containing only 2 grams, not nearly enough to properly fuel our bodies), leaving us unsatisfied and searching for another snack.

What happens when our bodies consume sugar?

So we taste the sweet treat and opioids and beta endorphins are released to give us that great feeling of quick energy, aka, a sugar high. The most common form of sugar, called sucrose, is made up of 50% glucose and 50% fructose. The glucose half of sugar enters our blood stream and is used efficiently and quickly as energy, any excess is stored for later (as Damon says, “Kinda like a spare battery”).

The fructose half, on the other hand, is different. Because it occurs so rarely in nature, the liver doesn’t have a system for dealing with fructose. So it rushes it straight into the blood stream in an effort to get rid of it. However, if we have excess glucose stored up, this fructose isn’t needed for energy and is changed into fat. That’s right, sugar TURNS into fat! Some of this fat will stay in the liver, increasing the risk of insulin resistance and diabetes. Later, this fat is released into the bloodstream in the form of triglycerides, resulting in obesity, blocked arteries and heart disease.

When we continue to eat foods high in carbohydrates, our bodies produce and release a hormone called insulin to aid in the absorption and usage of glucose. It acts like a key, if you will, to unlock our cells so they can absorb the glucose and use it for energy. But while this insulin is dealing with glucose, it’s also telling our fat cells to hold onto fat, turning off our fat burning processes.

So we keep eating sugar, continuing to add to the fat in our liver. With all the glucose in our blood, we maintain a high level of insulin, which tells our fat cells to hold onto all the fat. We can’t burn off fat when insulin is around dealing with all the sugar! And around, and around it goes.

The different kinds of sugar…

There are two types of “sugar” called monosaccharides and disaccharides. Monosaccharides inlude glucose (known as dextrose), fructose and galactose. Disaccharides include sucrose, maltose and lactose. Oligosaccharides are what we refer to as “artificial sweeteners”, they are chemically different substances with a sweet taste, but are not classified as sugars. (Source)

Sounds eerily similar to an addiction, right? Studies have shown that rats prefer sugar and its effects over that of cocaine and they’ll return to the sugar over the drug, time and time again.

Not all calories are created equal…

In 2008, The National Institute of Health stated that “obesity occurs when a person consumes more calories than he or she burns.” And fitness gurus will spout the same lies telling you to cut calorie consumption (oftentimes to an unhealthy level) to obtain the slim physique we all desire.

In That Sugar Film, Damon tracked his caloric intake and quickly realized he was consuming the equivalent, or even fewer calories while on his experimental diet. He was eating more food, but fewer calories and gaining weight! A gram of fat contains 9 calories, where a gram of sugar contains only 4, so it’s easy to see why the health industry shames fat over sugar, but a serving of avocado and some nuts will nourish your body, making you full and fueled over a sugary alternative. And clearly not all calories are created equal because Damon was consuming fewer calories overall, but gaining weight. And not just any weight…belly fat!

Not all sugars are created equal…

It’s true not all sugars are the same, but there aren’t as many differences as we’d like to believe. Just like table sugar, honey is made up of glucose and fructose, the difference is in the trace minerals and antioxidants that may be present in the honey (raw & unfiltered). The same goes for organic evaporated cane juice: it contains both glucose and fructose.

So why not just buy white table sugar since there’s minimal difference between sugars? Sugar beets (where the majority of table sugar is derived) are often genetically modified (GMO), so we choose organic sugars over white granulated sugar to avoid these risks.

After 6 weeks, Damon’s test results showed his liver had turned to fat, his belly had expanded in inches, he was experiencing constant brain-fog, and he was rarely feeling full.

The hormone in his liver, called ALT (Alanine Aminotransferase), went from a healthy 20 below the safety line, to a dangerous 20 above the safety line (taking him from the healthiest 10th percentile to the unhealthiest 10th percentile). His triglyceride levels (fat in the blood) went from a healthy .08 to 1.5. He gained 18 pounds (8.5 kg) and added 7% to his total body fat. His waist also increased by 10 cm (almost 4 inches). In six short weeks! (Makes ya reconsider a two-week vacation splurge, doesn’t it?)

Furthermore, Damon maintained his weekly workout schedule, but found keeping up with this routine became increasingly hard, near impossible toward the end of the experiment.

The moral of the story…

Sugar lurks around every corner, and not just in the obvious forms of lattes and frappes, cookies and ice cream, or cakes and candy. It’s hidden in condiments and dressings, soups and bread, yogurt and nut-milk.

Take the time to watch That Sugar Film and let what you see sink in. Then, take inventory of the foods you eat and discover any sugar lurking within. This is Step #1 of a multi-step Healthy Change. Once you watch the film, come back and comment with the most impactful information you learned from the documentary.

And always remember, obtaining knowledge and information are the first steps to change, but don’t let it bog you down and make you feel helpless. Even small changes are good! Cutting back on ice cream from 7 nights a week to six nights a week IS progress! We all have to start somewhere!

Kelsey Steffen
I am a wife, a mother of five, and forever a learner. My husband and I desire to live a life “Full of Days”. This means finding “fullness” in the everyday grind, which encompasses all areas of life including real food, cooking, health and wellness, time-management, homeschooling, etc., etc. I spend my days homeschooling our four older kiddos (and wrangling our youngest), cooking food the traditional way, and unabashedly doting over "The Hubs". I'm constantly refining it all while sharing with you...get to know us behind the scenes on Facebook and Instagram where we share our attempts at living life Full of Days.
Recommended Posts
Showing 2 comments

All Posts
For Binge Readers
By accessing or using any page on Full of Days (everydayfull.com), you agree that you have read, understood, and will abide by the Terms of Use, Full Disclaimer, Privacy Policy
and understand the Affiliate Program. Full of Days Contact. Copyright Smalltown Design, LLC. © 2017
5shares